Cancer that develops in the bones is called osteosarcoma. It affects the long bones of the body, such as bones in the arms and legs. The average age at diagnosis is 15, as it mostly affects pre-teens and teens.

Osteosarcoma is a type of sarcoma that starts in a connective tissue like cartilage, bones, and muscle. Thus, a sarcoma occurring in the bones is called osteogenic sarcoma or simply osteosarcoma.

It usually occurs at the ends of bones where there is the fastest growth taking place, which is known as growth plates. It affects the bones and areas like Thighbone (femur) around the knee, shinbone (tibia) around the knee, and upper arm bone (humerus) near the shoulder. There are some other locations also like the pelvis, skull, and jaw where it affects.

The exact cause for osteosarcoma is not known, although some risk factors are there:

Radiation exposure: Exposure to radiation increase your risk of developing this cancer. It may take many areas to occur.

Rapid bone growth: At the time of higher growth during childhood, the risk of developing an osteosarcoma increase.

Who can get osteosarcoma?

It occurs mostly in pre-teens and teens the average age for diagnosis is 15. It relates to a “growth spurt” in most children at a young age.

This cancer is more common in African-Americans than others. It occurs equally in girls and boys before adolescence. However, its chances are more in boys after adolescence. This occurs due to a greater skeletal growth period.

How common is it?

Osteosarcoma is the 3rd most common cancer in adolescence (after lymphomas and brain tumors) and accounts for about 3% of all childhood cancers. In developed countries like the USA, between 400 and 1,000 new cases arise each year, and is the most common primary bone tumor in young.

Tenderness or bone pain. Following are some symptoms of osteosarcoma:

Swelling combined with redness at the site of the tumor.

A tumor (mass) that is felt through the skin.

Pain upon lifting some weight.

Limping in case it affects the leg.

Bones break even after a simple movement.

Your doctor may begin with a physical exam to diagnose osteosarcoma to better understand the symptoms.

X-rayThese tests help your doctor in investigating bone symptoms and other signs of cancer. These tests may include: 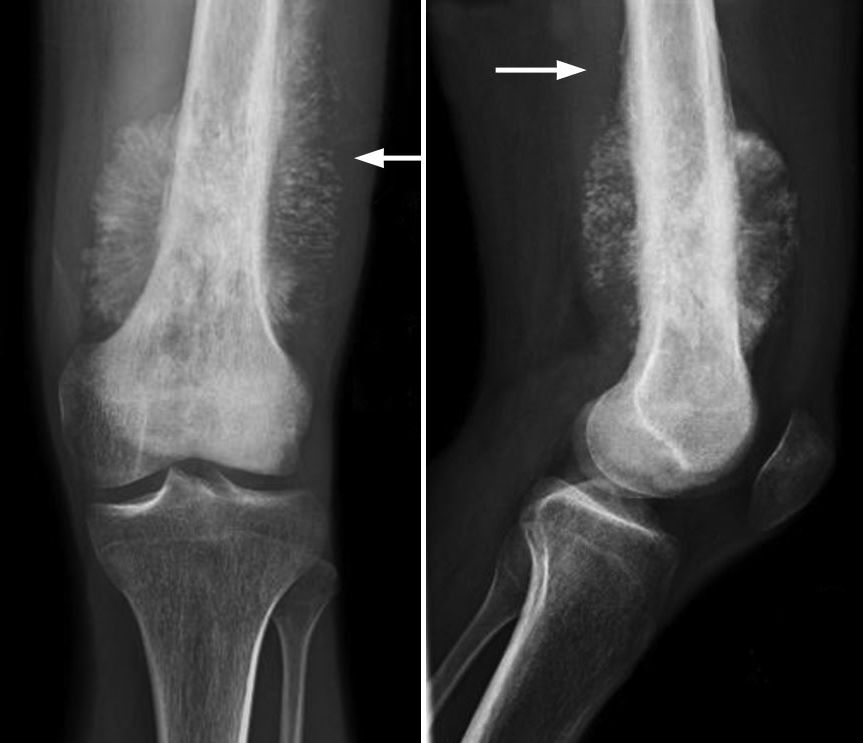 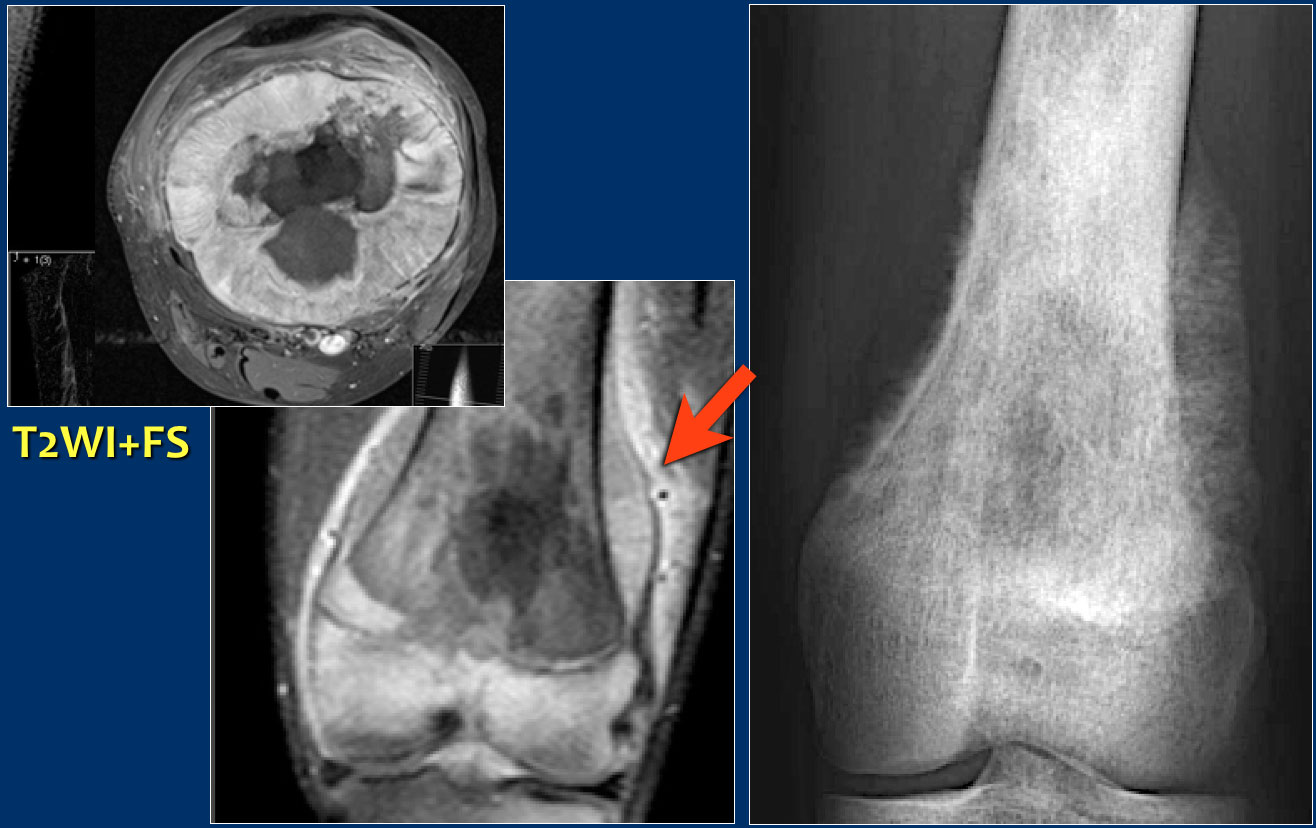 Biopsy: Remove some tissue for testing.

Your doctor will collect a sample of cells or tissue from your affected area and use it for laboratory testing. These tests help find whether tissue is cancerous or not. It also helps to find the type of cancer and the grade (aggressiveness) of cancer.

Biopsy procedures that help in the diagnosis of osteosarcoma:

Surgical biopsy: Your doctor will make an incision through the skin and removes either a portion of the tumor (incisional biopsy) or the entire tumor (excisional biopsy).

Needle biopsy: The doctor removes small pieces of tissue from the tumor by inserting a thin needle through the skin and guides it into the tumor.

It needs careful planning by the medical team to determine the type of biopsy needed and determining how a doctor should perform it.

A doctor should perform the biopsy in a way so that it doesn’t interfere with future surgery to eliminate cancer. That’s why you should ask your doctor to refer a team of experts with extensive experience. They will help you treat the cancer before the biopsy.

The treatment for osteosarcoma mainly involves surgery and chemotherapy. In certain cases, radiation therapy might be an option.

Surgery: Its motive is to remove the cancerous tissue from the body. But, you should take into consideration what effects it might have on your daily life. For osteosarcoma, the extent of surgery depends on various factors like the location of the tumor and its size.

Operations for osteosarcoma: Your doctor may try to remove the cancerous part from your limb-sparing the limb function.

Whether you need an operation or not depends upon the size and stage of the tumor. It also determines how much of the muscle or tissue your doctor needs to excise. 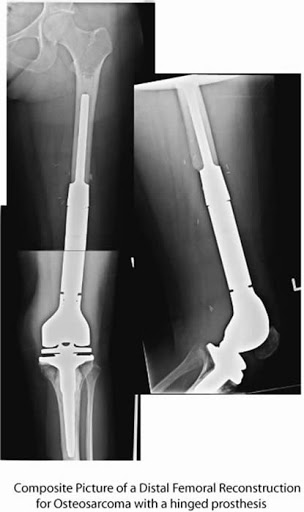 Amputation (Surgical removal of the affected limb): This type has reduced greatly over the years due to advancements in medical science. This method involves the removal of a limb or part of a limb.

A doctor recommends this only when there is no other option. However, advances in prosthetic joints can help improve the function and outcome of the surgery greatly. 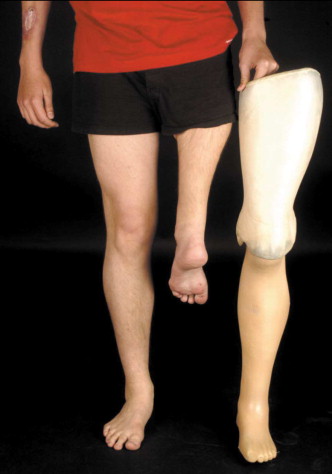 Rotationplasty (surgical removal of the lower part of the leg):

In the children who are still growing, a surgeon recommends this type of surgery. In this surgery, the surgeon removes the cancerous tissue and surrounding area, including the knee joint. Then the surgeon rotates the ankle and the foot, and the ankle works as a knee.

For the lower leg and foot, a prosthesis is used. A person can do the physical activities of sports and daily work because of the results. 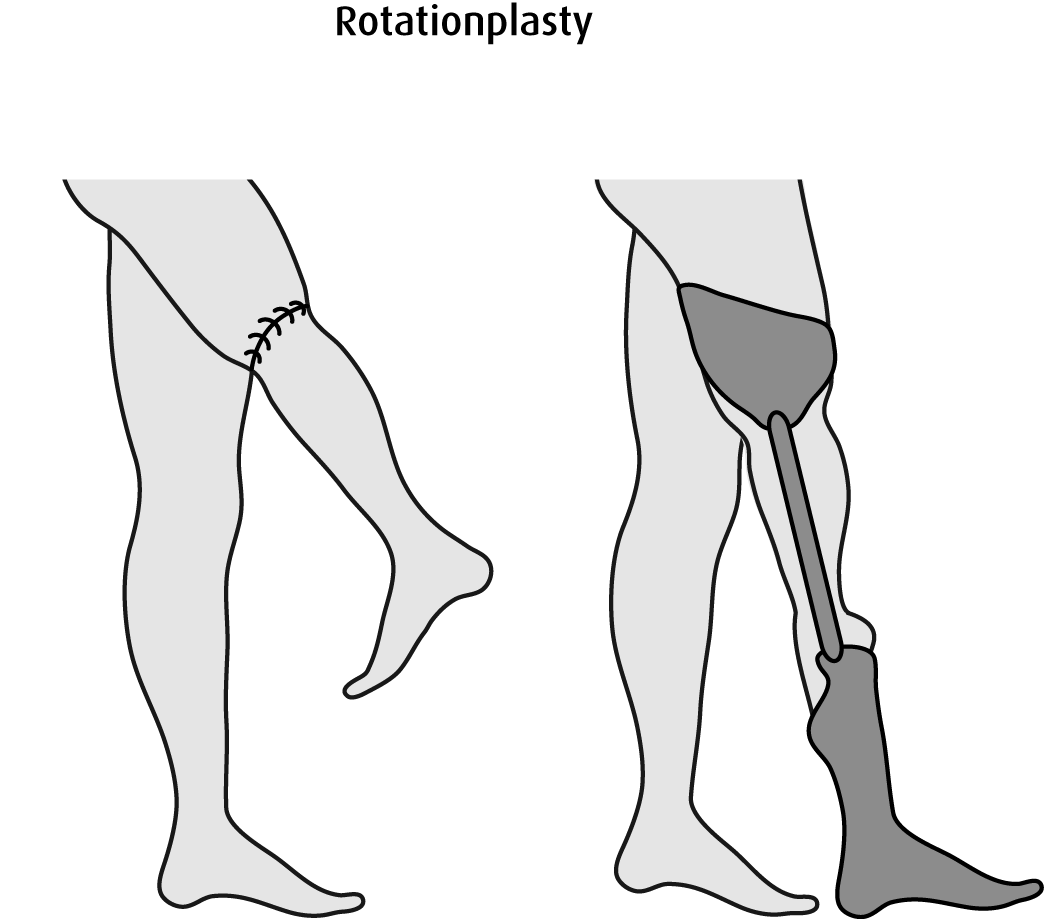 Chemotherapy: It kills cancer cells by using chemotherapy. A doctor administrates a combination of two or more drugs in pill form, by infusion into a vein (IV) or through both ways.

A doctor recommends chemotherapy before surgery in osteosarcoma (neoadjuvant therapy). To plan further treatments, a doctor monitors how the cancer cells respond to chemotherapy.

Limb-sparing surgery becomes possible if the osteosarcoma shrinks in response to the chemotherapy.

Cancer is very aggressive if the osteosarcoma doesn’t respond to treatment. To ensure all the cancer is removed, your doctor may recommend a different combination of chemotherapy drugs or suggest a more aggressive operation.

A doctor may also use chemotherapy to kill the remaining cancer cells. Chemotherapy slows the growth of a tumor in case it returns after surgery or spreads to other parts.

To kill cancer cells, a doctor uses radiation therapy, which uses high-energy beams, like protons and X-rays. In case a surgery is not successful or possible for a surgeon to remove all, then radiation therapy is useful.

A machine delivers beams of energy during radiation therapy while you lie on a table. To reduce the risk of damage to surrounding healthy cells, a specialist directs the beams to the area of the osteosarcoma.

Prepare for your appointment

You are likely to start making an appointment with your primary care doctor if some signs and symptoms worry you. Ask for a referral to an experienced specialist if your doctor suspects osteosarcoma.

A team of specialists typically can treat osteosarcoma. For instance;

Orthopedic surgeons or orthopedic oncologists who have specialization in operating bone cancers.

Doctors who have a specialization in treating cancers with systemic medications or chemotherapy.

Pathologists diagnose the specific type of cancer by analyzing a tissue.

Rehabilitation specialists who after surgery help in the recovery of a tumor.

What you should expect from your doctor:

You will face several questions from your doctor. You should be ready to answer to give more time to your doctor to address them. Your doctor may ask;

What signs and symptoms concern you more?

Have your symptoms been occasional or continuous?

When did you start to notice the symptoms?

The severity of your symptoms?

Is there anything that improves your symptoms?

Is there anything that worsens your symptoms?

Do you have any family or personal history of cancer?